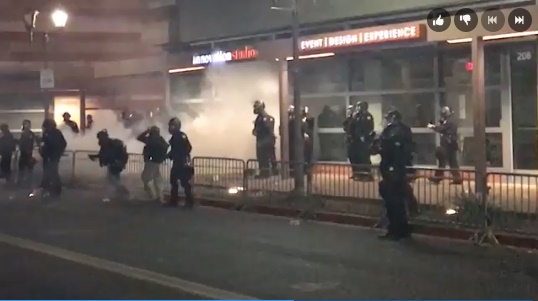 Law enforcement officers keeping the peace during the rally by President Donald Trump and the protest by anti-Trump groups in downtown Phoenix Tuesday night are being praised by city officials and slammed by protesters for their response to the crowds.

The mayor of Phoenix and the Phoenix police chief declared the overall handling of the event a success, AZ Central reports.

Two people were arrested and accused of aggravated assault on a police officer, Police Chief Jeri Williams said. Another person was arrested earlier in the day on an unrelated warrant, Williams said.

Reporters questioning the mayor and chief, some of whom were present as the scene unfolded along Monroe Street, said they heard no verbal warnings and that there was little provocation.

One person, identified as an activist organizer, described the scene to the police chief as chaotic. The chief denied that was the case. She added that officers adequately warned protesters.

Williams said she heard from officers that the first gas came from the protesters. There is video of a smoking object thrown by protesters at police, USA Today reports.

Other unlawful behavior by the crowd was also reported. People in the crowd began toppling pedestrian fencing that had been placed to block the roadway and create a safety zone surrounding the Convention Center, according to Howard.  He added that warnings were given to the crowd to disperse before officers responded.

Howard said Phoenix Police Chief Jeri Williams told her officers earlier in the week that “police response to criminal conduct would be professional, decisive, and immediately responsive.” He said this led to positive results. “The Phoenix PD is pleased to report no significant injuries or property damage [from the event],” he said.

How to Select and Use Portable Area Lighting

Law enforcement agencies now have a variety of choices for generator- and battery-powered illumination tools for night operations.

An officer with the Toledo Police Department was shot and killed over the Independence Day weekend, according to Toledo Chief of Police George Kral.

A woman reportedly attempted to assault an officer with the Canandaigua (NY) Police Department on Saturday night after she locked herself in a car, set off a large box of fireworks, then swung a knife at a police officer who tried to rescue her.