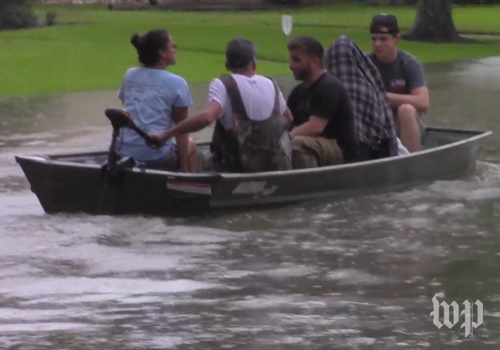 Officials in Texas said Monday afternoon that at least eight people appear to have died as a result of the storm battering the state. That toll includes six people in Harris County, home to Houston; one person in Rockport, near where Harvey made landfall; and another person in La Marque, near Galveston.

Authorities expect the toll to rise as rescue efforts continue and more rain, rising rivers, and surging floodwaters pummel the Gulf Coast. Forecasters say up to 20 inches of additional rain could fall on parts of Texas and Louisiana by Thursday.

About 2,000 people had been brought to safety with more still in need of help. Yet even with several deaths attributed to the storm, the full toll of Harvey's destruction remained unclear in Houston and across Texas and Louisiana, with officials warning that the flooding would linger and saying more than 30,000 people would be forced from their homes.

Fears also grew beyond Texas, where the floodwater pounding this city and others was measured in feet, not inches. President Trump on Monday declared "emergency conditions" in Louisiana, where forecasts have called for as much as two feet of rainfall in some areas.

During a news conference Monday, Trump said he expects Congress to take "very rapid action" to help the storm-ravaged areas. Trump, who is visiting Texas on Tuesday, also told reporters he may return to Texas on Saturday and, depending on the storm's movements, could also visit Louisiana the same day.