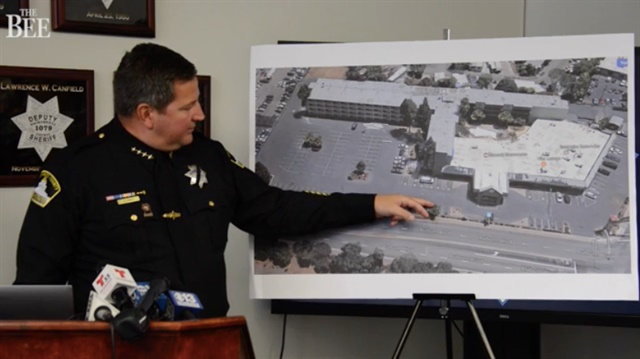 The Sacramento County (CA) Sheriff’s deputy killed in a hotel shootout last week continued to fire his weapon at an armed gunman, even after a bullet had pierced through the soft tissue of his shoulder and hit his heart, Sheriff Scott Jones said during a press conference Tuesday.

Deputy Robert French, a 21-year veteran of the department, rushed to the hotel parking lot after hearing reports of shots fired at the Ramada Inn, Sgt. Shaun Hampton said Tuesday. French, who was wearing a ballistic vest, was taking cover behind a police vehicle at the time of the shooting. He died on his way to the hospital, the department said.

“Even though he was mortally wounded, (French) continued to engage and pin down the suspect as best he could,” Jones said. “He only showed signs of injury once (the) scene was stabilized.”

The man suspected of firing the fatal shot, identified by the department last week as Thomas Daniel Littlecloud, shot approximately 34 rounds from his rifle, and at least a dozen more from a 9mm handgun during the hotel shootout, Jones said.

Littlecloud, 32, of Castro Valley, died in a hospital on Saturday from injuries suffered in the incident, the Sacramento Bee reports.