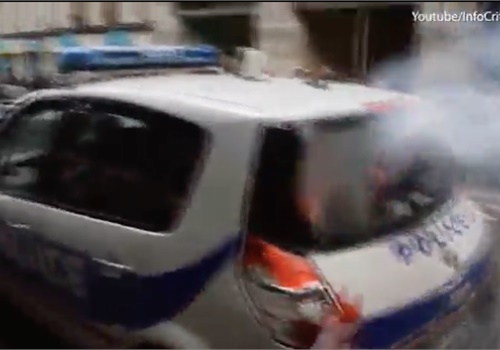 A transgender American student is among nine defendants facing up to 10 years in jail over a violent anti-fascist demonstration in France.

The protesters are accused of smashing up and then setting fire to a police car while two officers were still inside during a march in Paris in May last year, the Daily Mail reports.

The American, named only as 28-year-old Kara B., has already admitted throwing a metal bar at officers while 'driven by excitement and anger.'

A decorated Marine pilot who was at the controls of a helicopter that enabled Louisiana police to stop the gunfire of an active shooter on the roof of a New Orleans hotel in 1973 has died at the age of 84-years-old.

The New York Police Department has declared that it will deploy psychologists to every borough to encourage better officer mental health and wellness after a spate of recent suicides.

A man from North St. Louis County, MO, has been arrested after a two-day manhunt following the shooting of an off-duty uniformed police officer working a security job in Ferguson.

An officer with the Toledo (OH) Police Department was nearly struck by a vehicle in a shopping mall parking lot on Monday as she was dealing with an alleged parking violation.

An officer with the Elizabeth Borough Police Department is now charged with forgery in the case of a psychological evaluation of a fellow officer.

Officer Kenneth Reid Lester has died from injuries sustained in a vehicle collision in February 1995.

Two married off-duty law enforcement officers out on a date with each other are being credited with stopping an attempted armed robbery at a restaurant, stopping a man in a mask demanding money from the restaurant's cashier, and holding him at gunpoint until the arrival of on-duty officers.