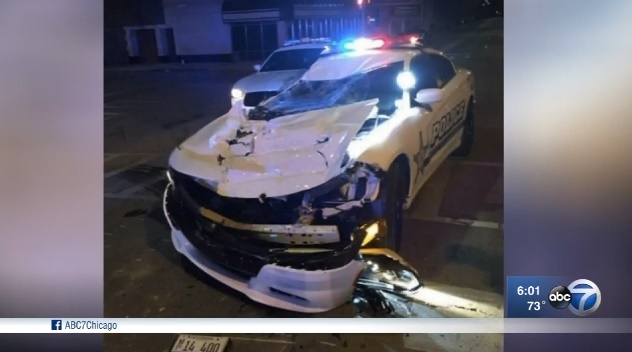 A Kankakee, IL, police officer escaped injury but his patrol vehicle was crushed when a reportedly stolen bulldozer backed over it during a pursuit Aug. 24.

Police say 18-year old Austin White of Bourbonnais had stolen the bulldozer from a Bradley construction site at 3 a.m. and began driving it around streets in nearby Kankakee.

After backing onto the squad car, other police vehicles followed the dozer along 12 city blocks. Video obtained by the I-Team shows officers on foot running next to the bulldozer and at times jumping onto the back in an effort to curb the heavy construction equipment.

Eventually the slow-speed chase came to a stop and officers pulled the driver out. White is being held on at least 6 felony counts including attempted murder and driving under the influence of drugs. Police say he has never had a driver's license. In total, investigators say he drove the construction vehicle for more than four miles on public streets before being arrested.