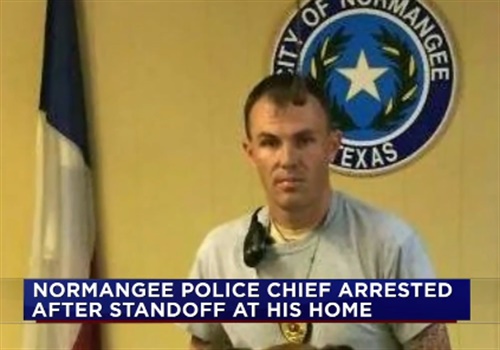 VIDEO: TX Police Chief Arrested After Standoff at His Home

After gunfire, a brief chase, and negotiations by police radio, the police chief in Normangee, TX, has been arrested. Charles Herford is charged with evading arrest and deadly conduct, reports KTRK.

Deputies responded to his home after a 911 call around 1:55 a.m. Texas Rangers said dispatchers spoke briefly to Herford's wife, but then the call dropped. When they called back, investigators said, the dispatcher heard two gunshots.

As deputies responded, they located Herford driving through the city in his police unit. They said he refused to pull over. According to DPS, there was a brief chase, but deputies lost Herford. Only later did they realize he had ditched his police unit and walked a few blocks back to his home.

Around 5:30 a.m., deputies found Herford back at his home, but they said he wouldn't come out. They negotiated with him over his police radio for the next 90 minutes before he finally gave up peacefully.

Herford was booked at the Leon County Jail. His patrol vehicle is now in possession of the mayor.

Mayor Dawkins said Herford's arrest leaves only one part-time officer on the police force in Normangee, which could keep the force from patrolling the city of about 800 residents. Presently, calls for service will go through the Leon County Sheriff's Office.