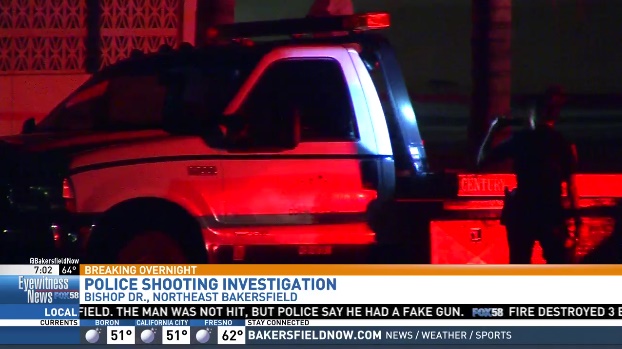 A Bakersfield, CA, officer fired his gun during a chase with a suspect Thursday night, but the suspect wasn't hit, reports KBAK.

Police Sgt. Ryan Kroeker said the officer had responded around 10:30 to the 2500 block of Bishop Drive for a possible domestic dispute. After the officer arrived, a foot chase took place, and gunfire was exchanged.

The suspect, 19-year-old Jesus Bello, climbed atop a roof before he was caught.

Bello was in possession of a "blank" gun, which appears and sounds just like a real gun but doesn't actually fire bullets.

Bello allegedly pointed the gun at the officer and shot during the chase. Kroeker said the imitation gun does expend shell casings, and those were found at the scene as evidence that Bello fired the gun.

Police said Bello suffered a minor finger injury unrelated to the shooting and was arrested on suspicion of brandishing an imitation firearm, resisting arrest, and participating in a street gang.