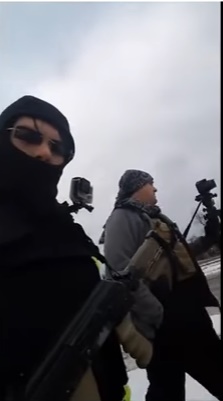 One of the men wore a black mask and bullet-resistant vest and a had a semi-automatic rifle slung over his shoulder, according to police.

The incident was live-streamed on Facebook and later posted on YouTube. Before entering, the man filming says in the video they intended to file a complaint claiming they were "illegally pulled over" an hour prior.

Dearborn police haven't verified the identities of the suspects but said a statement is forthcoming, MLive reports.

"Dude, put that on the ground," an officer can be heard saying shortly after the two men enter the police station. "Put it on the ground or you are dead ... I will shoot you. I will put a round in you, sir."

"It's all legal, sir," one of the men is heard saying.