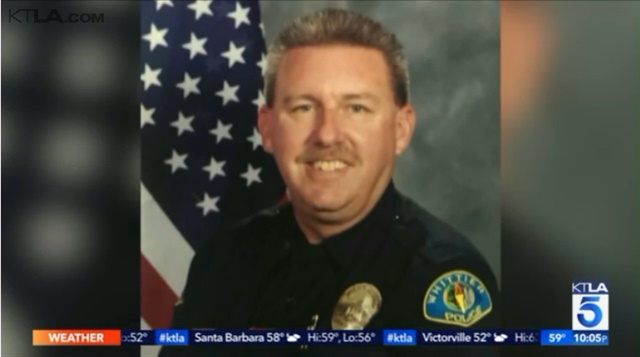 The officer killed in a shootout Monday in Whittier, CA, has been identified as Officer Keith Boyer, a 27-year veteran of the Whittier Police Department.

Boyer was hired by the department in 1989 and spent time as a dispatcher, jailer and reserve before becoming a police officer in 1990, KTLA reports. He had recently been talking about retirement, Whittier police Chief Jeff Piper said at an emotional news conference Monday afternoon.

Boyer is the department's first death since the late 1970s. He was fatally wounded around 8:30 a.m. Monday while responding to a traffic accident, the Los Angeles County Sheriff’s Department said in a news release.

Officer Patrick Hazel, who was hired three years ago by Whittier police, was also injured in the shooting and is expected to survive, sheriff's Lt. John Corina said.

The suspect, who is only being identified as a 26 year-old man, is a reported gang member. He was allegedly driving a stolen car when he opened fire on the Whittier officers and may have been involved in another murder that happened hours earlier Monday in East L.A. He is believed to have been released on parole within the past two weeks.

During the news conference Chief Piper took aim at laws which have allowed early release of convicted criminals on parole, CW6 TV reports.

“Enough is enough,” Piper said. “We keep passing laws that keep raising crime. We have to think about what we are doing to our communities and officers by putting these kinds of people back on the street.

“You have no idea how things have changed in the last four years,” Piper continued. “People don’t want to follow rules, don’t care about people.”

Piper’s concerns were echoed by Los Angeles County Sheriff Jim McDonnell who spoke about the passage of new laws that put convicted criminals like the suspected shooter out on the street with an early parole.

“AB 109 provides for some early releases. Prop 47 stops people from entering the system and Prop 51 accelerates their release,” McDonnell said.