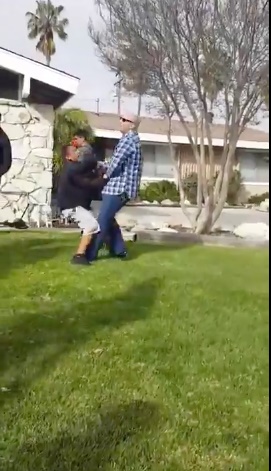 Authorities on Thursday released new information about the investigation into a caught-on-video incident in which an off-duty LAPD officer fired a weapon during a struggle with a 13-year-old boy and a confrontation with other teenagers earlier this week in Anaheim. The incident sparked protests in the city and property damage at the officer’s home and other houses on the street.

Anaheim Police Department Chief Raul Quezada said the incident was part of an "ongoing dispute" involving multiple juveniles walking across the officer's lawn, which escalated Tuesday afternoon into a confrontation between the teen and off-duty officer.

During the initial confrontation, the officer alleged the boy said he was going to shoot him, according to Quezada.

"While physically detaining the juvenile, several houses away from where the initial incident began, several other juveniles became involved and a physical altercation ensued," the police chief said.

At that point, two juveniles allegedly assaulted the off-duty officer and knocked him to the ground. After the second alleged battery, and after the group surrounded the officer, he drew a handgun and fired a single shot, according to Quezada.

Quezada also addressed protests that had turned violent in the city the night before.

About 200 to 300 demonstrators took part in the protest, which began in the Anaheim neighborhood where the confrontation took place before, Quezada said.

The group was calling for charges to be filed against the officer, organizers told KTLA.

Violence erupted at one point, with some protesters gathered around the officer's home shattering windows, damaging cars and spray-painting a neighbor's garage door.