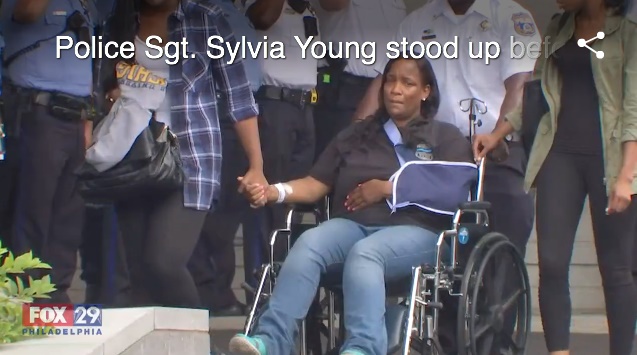 The first Philadelphia-area officer targeted in a gunman's hate-fueled rampage Saturday is out of the hospital.

Philadelphia Sgt. Sylvia Young looked emotional while being welcomed by a line of dozens of uniformed police officers saluting her. The 19-year veteran -- with her arm in a sling -- was wheeled out of Penn-Presbyterian at about 1pm Tuesday. Then, she stood up on her own feet before a highway patrol escorted her home.

Sgt. Young was one of two officers shot in West Philadelphia, late Friday night, along with three other people. One of them, a 25-year-old woman, was killed.

Investigators say at about 11:18pm Friday, Young was parked and sitting in her patrol vehicle at 52nd and Sansom streets when she was approached by a man, later identified as Nicholas Glenn, who was armed with a 9mm handgun began firing approximately 18 rounds at the driver’s side of Sgt. Young’s vehicle.

She was hit in her left shoulder, arm, and torso area of her body, taken to the hospital, and listed in stable condition, Fox 29 reports.