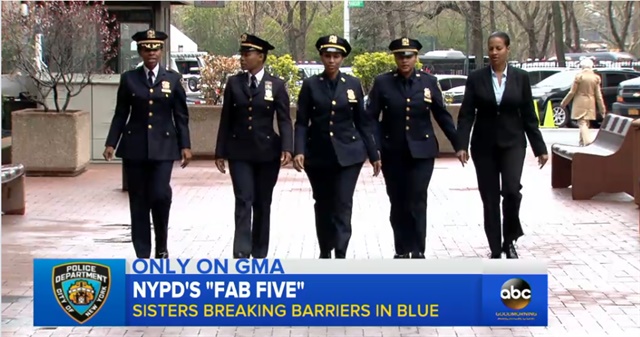 VIDEO: 5 Sisters Serve on NYPD Together

The Holmes sisters are the New York Police Department’s very own “fab five,” five high-ranking and barrier-breaking police officers who just happen to be sisters.

Juanita, the oldest of the Holmes sisters, is one of the highest-ranking women in the NYPD, overseeing the Domestic Violence Unit.

Capt. Janice Holmes is the first African-American female commanding officer of her precinct. She said the sisters are competitive with each other.

All the sisters followed in the footsteps of Bernice, ABC News reports.

The Holmes sisters grew up in Queens, New York, with 13 siblings in all. Today, more than half of those siblings have careers in law enforcement.

Juanita’s son, William, will graduate from the police academy this summer. The sisters said they are proud of their family's legacy.

“I think it is a good thing when you can leave a legacy of positive role models who the children and people in general in our environment that we were raised in can view and say, ‘You know, they were no different than me and look what they achieved,’” Selena said. “It's a mindset. If you think big, you can be big. If you think small, you can be small.”