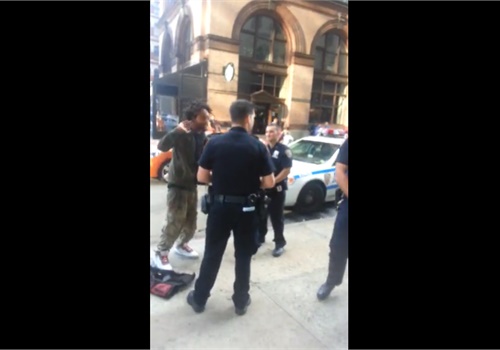 Ruben An, 24, filed suit in Manhattan federal court Wednesday over his 2014 arrest for using his cellphone to document three NYPD officers rousting a man they found lying on a sidewalk near Astor Place, reports the New York Post.

But An doesn't want money damages — just a judge's ruling that his rights were violated, and a permanent injunction barring city employees from acting against anyone who "records or attempts to record police officers who are performing official duties in a public place."

An's two-minute video clip, filed along with his Manhattan federal court complaint, shows one of the officers accusing him of blocking the sidewalk, then grabbing and arresting An when he refuses to show ID.

An was charged with obstruction of governmental administration, disorderly conduct, and resisting arrest, but a jury cleared him of all counts last July.

An's suit claims that despite the NYPD's official policy, the department "maintains a widespread practice and custom of arresting, threatening to arrest or otherwise interfering with" anyone who does.