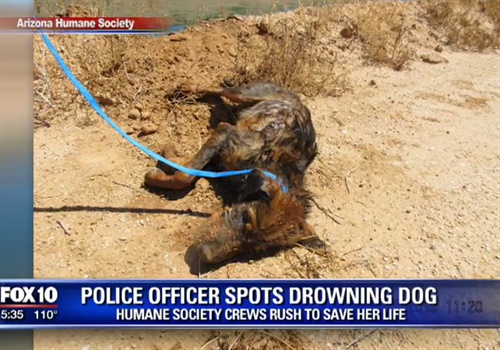 A stray puppy looking for some relief in the heat fell into a Phoenix, AZ, canal while trying to drink water. But after some tense minutes, a Phoenix officer spotted her and came to the rescue, reports KSAZ.

Goebel says it's that officer's call to their emergency medical rescue team that kept this little dog alive.

"Actually, the police officer was hanging onto the belt loop of the EMT as he leaned over the canal trying to rescue her with the catch pole and every time she kept floating right by," she said. As the puppy started giving up, sinking into the canal's murky water, they were finally able to bring her out.

After the rescue, the exhausted, 1-year-old puppy lay seemingly lifeless on the side of the canal, barely holding on to life. Now, two days later, she's making amazing strides toward recovery.

"She's starting to stand up and walk around her kennel, and she's definitely getting better and stronger every day," Goebel said.

The dog didn't have a collar and no one could find a microchip, but unless someone comes forward the good news is she already has a new owner.

"Once she's made that full recovery, the police officer who originally spotted her wants to make her part of his family," Goebel said.

The officer wants to remain anonymous.