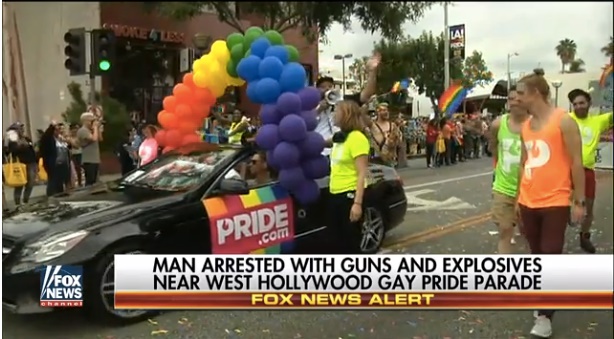 VIDEO: Man Arrested Sunday in California with Weapons May Have Been Targeting Gay Pride Parade

An Indiana man armed with three semi-automatic rifles and chemicals that could be used to make explosives was arrested in Southern California on Sunday and told police he was headed to a West Hollywood gay pride parade, officials said.

The arrest in Santa Monica of James Wesley Howell, 20, of Jeffersonville, came just a few hours after at least 49 people were shot and killed in a gay nightclub in Orlando, Florida, though police said they had found no evidence of a connection between the events.

Santa Monica Police Chief Jacqueline Seabrooks initially tweeted that Howell told officers he wanted to "do harm" at the gay pride event, but she later corrected her statement to say only that Howell said he was going to the parade, about seven miles from the scene of the arrest.

That prompted them to search the whole car. They found two more rifles, high-capacity magazines and ammunition and a five-gallon bucket with chemicals that could be used to make an explosive device, police told Fox News and the Associated Press.