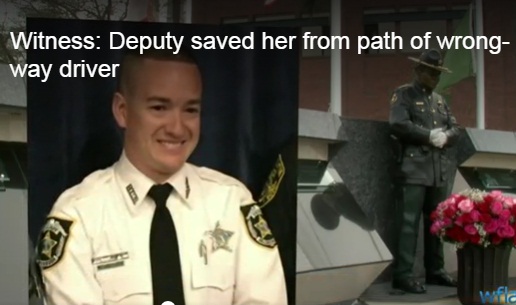 A woman who called 911 after seeing a wrong-way driver headed toward her on Florida's Leroy Selmon Expressway Saturday morning believes fallen Hillsborough County Sheriff’s Deputy John Robert Kotfila Jr. intentionally drove into the path of the vehicle to prevent the wrong-way driver from hitting her.

Sarah Geren was returning home from work with her boyfriend early Saturday morning when she says she saw Erik McBeth, 31, barreling towards her, driving westbound in the eastbound lanes of the Leroy Selmon Expressway near Brandon.

“I started to pull over to the side of the road, but that hadn’t even occurred all the way when the officer rushed around me… one or two seconds after he passed me, he hit the car, instead of me,” said Geren.

She is sure HCSO Deputy John Robert Kotfila Jr. made the ultimate sacrifice and intentionally crashed into the vehicle, taking the hit and saving her life, WFLA TV reports.