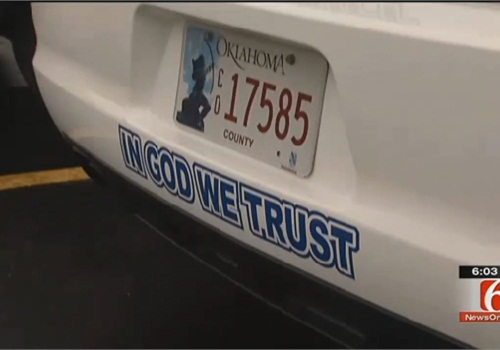 VIDEO: Oklahoma Sheriff Adds 'In God We Trust' to Vehicles

The Creek County (OK) Sheriff's Office is outfitting its fleet with a phrase that has some choosing sides. The sheriff said the plan is to put "In God We Trust" decals on all detective and deputy vehicles, but he said the four words are not about religion.

"This is patriotic," he said. "It's our national motto. It's not that the Creek County Sheriff's Office is trying to impose or force religious beliefs on anybody."

Davis said, "If I have an employee that comes to me and says, 'I don't want it on the car that I'm assigned,' I don't have a problem with that. Then I'll allow them to make that decision whether or not they want it on that car."

The sheriff said no taxpayer money went toward buying the decals; he said they were all donated.