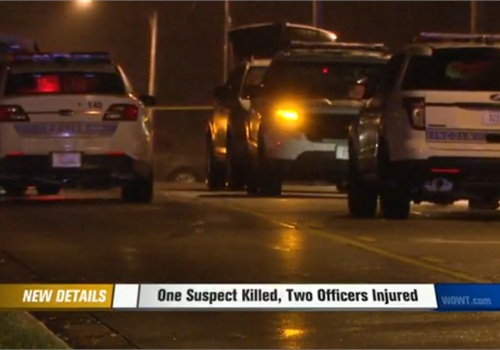 Lincoln, NE, Police Chief Jim Peschong said Monday the man shot and killed Sunday night after shooting an officer and wounding another was in the process of being arrested when he told officers he wasn't going to jail.

A struggle then ensued with three officers. During that fight, the 29-year-old Central City, NE, man reached into his waist, pulled a gun, and fired a shot, wounding one of the officers in the arm. The suspect was then shot. He was pronounced dead at the hospital. The wounded officer is expected to recover, reports WOWT.

One of the other officers involved in the scuffle was taken to the hospital after being placed in a headlock and punched in the face. That officer was treated and released from the hospital.

It all started when an officer spotted the license plate number on a vehicle parked in a driveway near North 73rd and Adams streets just before 9 p.m. The plate had been reported stolen. A man was sitting in the driver's seat with a passenger, who had the door open.

After speaking with the suspect, it was determined he was wanted on two felony warrants for making terroristic threats and obstructing a peace officer.

By this time, two other officers arrived at the scene and the fight began as they tried to arrest the suspect. His passenger got out of the car and ran into the house. Five people inside were taken in for questioning and later released.

The identities of the dead man and three police officers directly involved are not being released at this time. The officers have been placed on administrative leave pending the outcome of a grand jury investigation, required by law whenever someone dies in police custody.