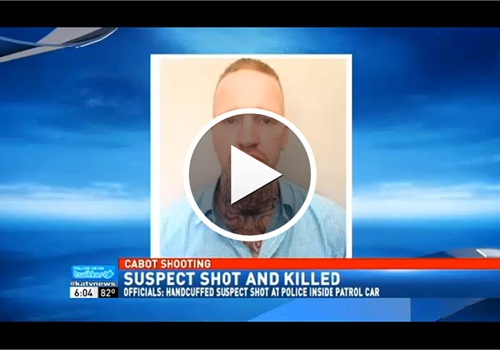 Authorities are investigating a shootout in Cabot, Ark., Tuesday night between law enforcement and a handcuffed parolee who was in the back of an officer's car.

Many questions still surround the investigation like how the suspect managed to get his hands from behind his back and get a gun inside of the Sheriff's deputy's vehicle, KATV reports.

According to the Deputy Director at Arkansas Community Correction, Dina Tyler, officers were searching for a suspect at a home on Main street who was wanted in connection with another crime.

“We were with Lonoke County Sheriff's Department last night with five of our special response team officers. Highly trained parole officers were with them. We were helping with the search for a suspect wanted in connection with another crime,” Tyler said. “Inside the house that was surrounded were two people. One of those people were Jonathan McIntosh, who identified himself as being on parole.

“Because he was on parole and because they were questioning everybody our officers searched McIntosh. During that search they found a small baggy of what they thought to be drugs. A small baggy of white powdery stuff,” Tyler said. “As a result he was put in handcuffs. Because obviously a parolee cannot have illegal drugs. They handcuffed him behind him. One of the Sheriff's deputies took McIntosh and put him I the back of his police car.”

The officers went back to question him. Once they opened the door Tyler said McIntosh managed to get his hands in front of him. He had a small pistol in his hands and began shooting at the officers.

“Our officers did what they should have done to protect themselves. They dropped to the ground and they returned fire because they were being shot at,” Tyler said.

According to Tyler, McIntosh was shot multiple times but later died in the emergency room.

Tyler said McIntosh didn't have a record of violence and was due to be off parole in July.