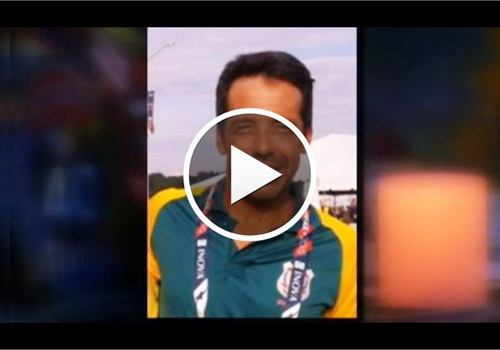 Fighting tears at a vigil Friday evening, teammates remembered a police investigator from Brazil who was killed in a bicycle collision at the World Police and Fire Games in Fairfax County, Va., Thursday, reports WRC-TV.

Thousands of miles from his home in Brazil, 48-year-old Carlos Silva, a member of the Civil Police of the Federal District of Brazil, died about 5 p.m. Thursday.

Silva's body was transported from Inova Fairfax Hospital about 10 p.m. by an honor guard by the Fairfax County Police Department. He is survived by his 13-year-old daughter.

Two other riders were in critical condition after the devastating crash -- a 43-year-old man and a 44-year-old man, police said.

A rider in a cycling time trial blew a front tire on a downhill portion of the course in Prince William Forest Park about 12:30 p.m., police said. The rider lost control of the bike on Scenic Drive near Turkey Run Road and crashed, causing a chain reaction, police said. The cyclists were wearing the proper safety gear, police said.