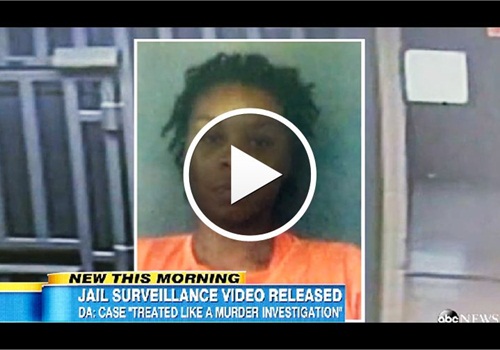 Texas authorities have revealed what they say is the specific chain of events on the morning of Sandra Bland's death, as shown in recently released surveillance footage from inside the jail during the hours last week leading up to the discovery of her body, reports Good Morning America.

Bland was arrested July 10 for allegedly assaulting a police officer after he pulled her over in a traffic stop in Waller County, Texas, the Sheriff's Department said. She was found dead in her jail cell three days later, on July 13, and while officials initially said her death was a suicide, Waller County District Attorney Elton Mathis announced Monday night that the case is being investigated by numerous agencies and treated "like a murder investigation."

At 7:05 a.m. Bland told a jailer "I'm fine." At 7:55 a.m. Bland used the intercom in her cell to contact the jail's main control room. She asked how to make a phone call from the phone on the wall of her cell, but there is no record of her actually making a call. About an hour later, a female jailer went to Bland to see whether she wanted to go to the facility's recreational hall, but that is when the female jailer saw that something was wrong. The jailer then rushed to get help.

The dash-cam footage from the police car is expected to be released today, along with the results of the independent autopsy report ordered by Bland's family after the death was first declared a suicide.