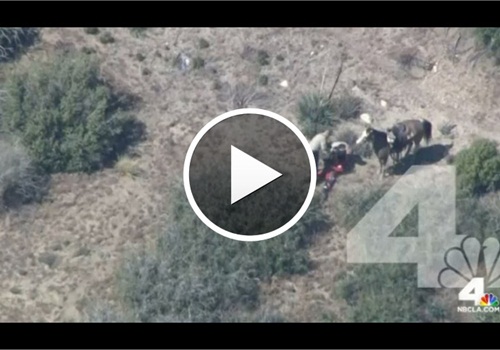 The San Bernardino County Sheriff ordered an internal investigation Thursday into an arrest caught on an NBC Los Angeles' NewsChopper4 video that showed deputies beating a suspect when they caught up to him following a wild desert chase on horseback.

Aerial footage showed the man falling off the horse he was suspected of stealing during the pursuit in San Bernardino County Thursday afternoon.

He then appeared to be stunned with a Taser by a sheriff's deputy and fall to the ground with his arms outstretched. Two deputies immediately descended on him and appeared to punch him in the head and knee him in the groin, according to the footage, reviewed several times by NBC4.

The group surrounding the man grew to 11 sheriff's deputies.

In the two minutes after the man was stunned with a Taser, it appeared deputies kicked him 17 times, punched him 37 times and struck him with batons four times. Thirteen blows appeared to be to the head. The horse stood idly nearby.

Sheriff John McMahon announced the move to place the deputies -- including a sergeant and a detective -- on leave during a news conference Friday afternoon.

"I am disturbed and troubled by what I see," he said. "It does not appear to be in line with our policies and procedures."