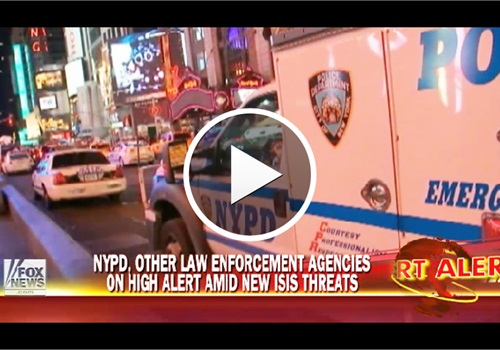 The nation’s largest police force is on high alert after ISIS re-released a September propaganda video urging the murder of “intelligence officers, police officers, soldiers and civilians” in the U.S., a development federal law enforcement agencies as well as the NYPD took seriously, given recent events -- including last week’s Islamist rampage in Paris.

“Strike their police, security and intelligence members, as well as their treacherous agents,” the video, released on Twitter by ISIS spokesman Abu Mohammad Al-Adnani, urges. It specifically named the United States, France, Australia and Canada as targets, Fox News reports.

An NYPD internal memo warned police officers to "remain alert and consider tactics at all times while on patrol," and on Monday a spokesman confirmed it was related to the resurfacing of the video.

“If you are assigned to a fixed post, do not sit together in the RMP [police car],” members of the Sergeants Benevolent Association were instructed in an email obtained by the New York Post. “At least one officer must stand outside the vehicle at all times. Pay attention to your surroundings. Officers must pay close attention to approaching vehicles . . . Pay close attention to people as they approach. Look for their hands.”

The FBI and the U.S. Department of Homeland Security issued a similar bulletin to law enforcement across the country, but in a subsequent statement called it part of a “continuous dialogue.”