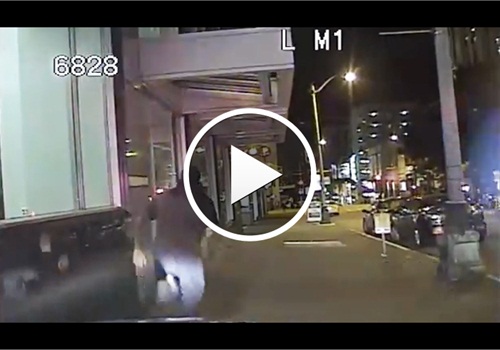 A white Seattle officer has been suspended for 15 days without pay after using racially charged language while pursuing a black domestic violence suspect downtown. The incident occurred in 2013.

The police union will appeal the punishment, calling it "too severe." Meanwhile, the department said the incident demonstrates that it is committed to holding officers accountable for their actions, MyNorthwest.com reports.

In-car video obtained by KIRO Radio shows the officer pursuing a black male near Fourth Avenue and Union Street on October 7, 2013. The suspect, 32-year-old Kimo M. Warren, was being sought for a domestic violence incident.

Several minutes into the pursuit, Warren is seen crossing in front of the officer's patrol car on foot. The officer can then be heard yelling, "You're gunna get your ass shot, boy."

The department launched an internal investigation into the officer's conduct after her superiors heard the comment while watching the dash cam video as part of a use-of-force review. Details of the investigation were released to KIRO Radio last month under a public disclosure request. A second request was made for the in-car video, which the department provided on Friday.

While being interviewed by investigators with the Seattle Police Department's Office of Professional Accountability, the officer expressed regret over her word choice.

"She's chasing somebody who just committed a domestic violence assault a couple blocks away, and I'm quite sure she wishes she would have chosen her words differently," said Ron Smith, president of the Seattle Police Officers' Guild. "In fact, I have spoken to this officer and she is quite alarmed as to what she said at that time."

"The officer is over 40 years old ... to her, he looked significantly younger than her," Smith told KIRO Radio. "I believe that she actually was trying to communicate with a fleeing suspect that she thought was much younger than her."

Concerns about the officer's conduct during the October 2013 incident extended beyond her language.

In the same video, she could be seen driving onto curbs and sidewalks.