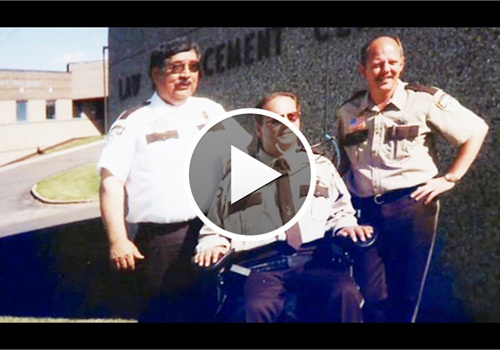 Hundreds of mourners payed their final respects to Polk County Sheriff's Deputy Mike Seversen, who was shot in the line of duty 23 years ago. Seversen, 50, had been confined to a wheelchair ever since the bullet severed his spine.

On April 19, 1991 he and other officers responded to apprehend a 25-year-old man who was suspected of shooting a man in North Branch the day before.

The suspect was spotted walking and holding a handgun. When Seversen and a Burnette County deputy confronted the man, he shot both of them, killing Dep. Allan Albee and critically wounding Seversen.

KARE 11 Minneapolis covered the deputy's funeral services this past Saturday, exactly 23 years after the incident. He died on April 14, 2014.

"Mike was not a former member of the department," Polk County Sheriff Pete Johnson told mourners. "Mike was still a deputy with the Polk County Sheriff's Office … People have always commended us and our department on how we kept Mike part of that, but, as I look at it, I think Mike did as much for us as we ever did for him."