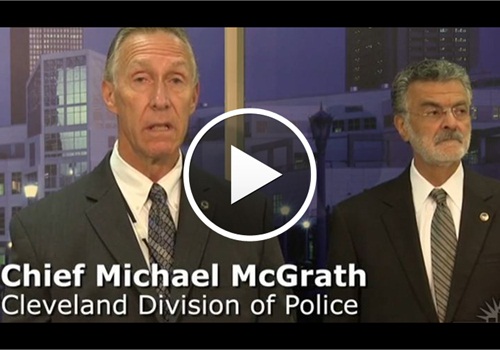 Twelve Cleveland police supervisors were fired, demoted, or suspended for failing to control a pursuit that involved more than a third of the agency's officers and led to the deaths of two unarmed suspects.

One sergeant was fired, two other supervisors were demoted, and nine were disciplined for their roles in the Nov. 29 chase and shooting. Cleveland Police Chief Michael McGrath, Mayor Frank Jackson and other city leaders announced the disciplinary measures at a Tuesday press conference.

Sgt. Michael Donegan was fired because of "the gravity of your failure to execute your responsibilities as a sergeant of police for the city of Cleveland," said City Safety Director Martin Flask.

The chase of Timothy Russell and his passenger, Malissa Williams, began downtown after officers reported someone had fired a gun from Russell's 1979 Chevrolet Malibu SS. It ended about 30 minutes later in an East Cleveland middle school parking lot, when 13 officers fired 137 rounds at the Malibu, killing both suspects.