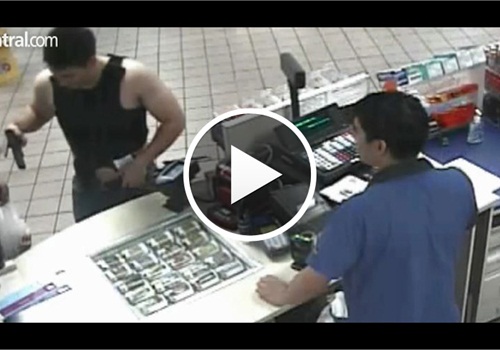 A Tucson (Ariz.) Police officer on probationary status was fired Tuesday for pointing a gun at a convenience store clerk while intoxicated, reports the Arizona Republic.

The agency confirmed the firing 23-year-old Kyle McCartin on its Facebook page. McCartin, who had been hired in September, went into the Giant Gas Station at about 3 a.m. with another man. The two men wore ballistic vests with no shirts, and McCartin can be seen on video surveillance pointing a pistol at the clerk.

<McCartin, who was arrested by Pima County Sheriff's deputies, has been charged with two counts of aggravated assault, reports KAIT.

"The simple fact of the matter is this: behind the badge, and beyond the uniform, is a human being, responsible for their own actions," the association said. "We fully support a full investigation into this matter and we ask for everyone’s patience as the facts unfold."