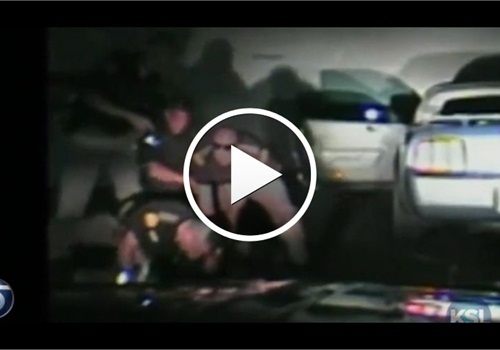 A Utah private investigator has sued four Utah Highway Patrol troopers, claiming they used excessive force on him at a traffic stop after he swallowed a prescription pill.

Ronny Todd May was pulled over around 10 p.m. July 9 for following too closely and running a stop sign. May claims he was trying to help a female friend who was having car trouble, reports KSL.

The troopers pulled over May and encountered the woman, described in the trooper's report as a "known drug user," reports the Salt Lake Tribune. The troopers began searching for narcotics and asked May to take off his shoes.

May pulled a pill of prescription methamphetamine medication for narcolepsy from his shoe and swallowed it, which was captured by a trooper's cruiser cam.

One officer then tried to recover the pill and three others then tackled May. One trooper is seen punching May repeatedly. May was also TASERed repeatedly, he claims. Trooper Brandon Whitehead, who initially pulled May over, wrote in his report that May continued to resist, reports the Deseret News.

"I was concerned of the situation to such a degree that I radioed three separate times for additional officers to assist controlling the situation," Whitehead wrote. "During the ground fight, May had such a physical stamina and strength I was concerned and aware of the distinct likelihood he was in an excited delirium state."