Rochester, NY, police commanders urged city officials to hold off on publicly releasing body camera footage of Daniel Prude’s in-custody death because they feared violent blowback if the video came out during nationwide protests over the police killing of George Floyd, the Associated Press reports.

Deputy Chief Mark Simmons cited the “current climate” in the city and the nation in a June 4 email advising then-Chief La’ron Singletary to press the city’s lawyers to deny a Prude family lawyer’s public records request for the footage of the March 23 encounter that led to his death.

The video was made public by Prude’s family on Sept. 4.

“We certainly do not want people to misinterpret the officers’ actions and conflate this incident with any recent killings of unarmed black men by law enforcement nationally,” Simmons wrote. “That would simply be a false narrative, and could create animosity and potentially violent blow back in this community as a result.”

The city, which was the site of protests and riots after the video was made public, released the emails, police reports and other documents on Monday as Mayor Lovely Warren fired Chief Singletary and suspended Corporation Counsel Tim Curtin and Communications Director Justin Roj without pay for 30 days amid continuing fallout from Prude’s death. Simmons was named interim chief of the police department, the AP reports.

“That may mean you making commitments that might be uncomfortable for some of those constituents that you represent, but if your ultimate goal is to have true community safety, I will tell you right now, we have to work together in that effort,” Chief Medaria Arradondo said.

“These past three years have been saturated with a series of unimaginable events that individually and collectively have never happened in the City of Dallas,” Chief Renee Hall wrote.

SC Chief Stabbed in Face at Home, Suspect in Custody

Chief Franco Fuda said he was at his home when he heard a knock at the door and went outside to meet the suspect. The chief said the suspect told him that Fuda was "going to die today" before stabbing him below the eye with an ice pick. Fuda had been in the process of dialing 911.

Rochester Police Chief Steps Down Over Attacks on "Character and Integrity"

Chief La'Ron Singletary said in a statement that he was honored to serve the city in upstate New York for 20 years and commended his staff. However, he said the protests and criticism of his handling of the investigation into the March 23 incident "are an attempt to destroy my character and integrity."

Best had served as SPD’s police chief since 2018, and has been with the department for 28 years, moving through the ranks as an officer, sergeant, lieutenant, captain, and deputy chief.

St. Louis Police Chief John Hayden says his department is currently down 145 officers and that the residency requirement is the greatest challenge his department has with recruitment and retention.

"Cutting a police department that already had low staffing numbers, that was already struggling to keep up with the demand," Best told NPR on Wednesday. "How are we going to provide for adequate public safety in that environment?" 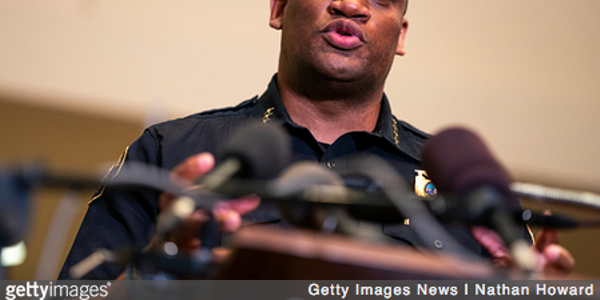 On Tuesday, Police Chief Chuck Lovell released a statement, saying "our elected officials need to do their part to draw a line in the sand and to hold people accountable."