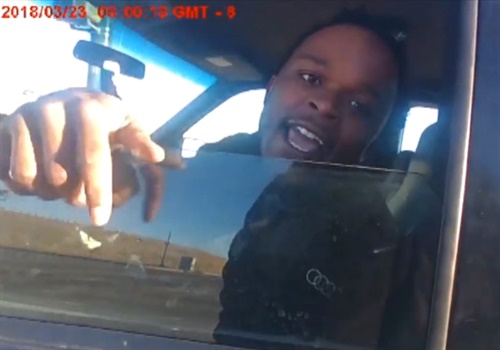 When Aurora, CO, police pulled over a man for driving 65 miles per hour in a 50 mph zone, they probably didn't know that the driver was the son of Denver Mayor Michael Hancock. But in an expletive-filled roadside tirade, 22-year-old Jordan Hancock made them fully aware of the relationship.

The entire interaction was captured on the body-worn camera affixed to Officer Paul McClendon's uniform.

According to Fox News, McClendon showed the video to Officer Paul Timmons, who recorded it with his cellphone and shared it with Officer Judy Gurley-Lutkin.

Now, Timmons and Gurley-Lutkin have each received a one-day suspension for the video being leaked.

In March 2018, Lt. Zach was working as a patrol sergeant when he and his officers got a call to check Kaila's residence. Kaila is a survivor of abuse and Zach spent that night bonding with her.

Officers responded to a disturbance call. While they searched for the person who was causing the disturbance, they saw a muzzle flash from a shotgun.

LAPD Could Lose 951 Officers to Layoffs

The report said that the LAPD cuts would bring the sworn police force down to 8,800, which matches 2002 levels.

Abbott floated the idea during a campaign tele-town hall Wednesday while discussing his push to punish cities that "defund the police" during the upcoming legislative session, which begins in January.

The marshals had information that the suspect, Andre Sterling, 35, was inside and were let in by a resident.

The cleats honoring Hamilton County Sheriff’s Office Deputy Corporal Adam McMillan are part of the NFL’s My Cause My Cleats program, a program that allows players to opportunity to support a cause close to them with custom-designed cleats.

More Than 2,000 Officers Injured in Summer's Protests and Riots

More than 2,000 law enforcement officers were injured in the first weeks of protests over the summer following the in-custody death of George Floyd, according to a report from the Major Cities Chiefs Association.

“We have already experienced … a reduction in our workforce, between sworn and civilian, in excess of 500 personnel,” Chief Michael Moore said during a video Q&A with members of the news media. “To suffer further losses would be devastating to the safety of the city.”

Another motorist didn’t see Officer Ornelas’ motorcycle approaching him from behind when the driver pulled from the right shoulder to make a U-turn directly into the officer’s path, according to the CHP.

Police vehicles had boxed-in the suspect’s vehicle when authorities say he aimed a semiautomatic handgun out of the driver’s side window and shot an officer at close range.