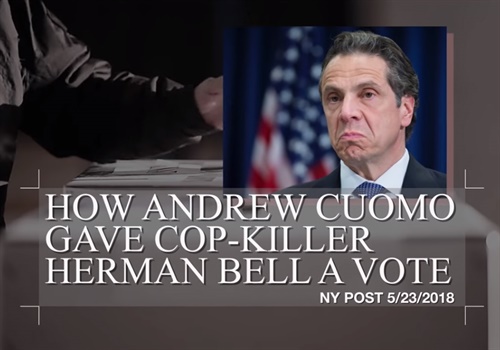 The widow of a New York City police officer killed after being ambushed by a convicted gang member posted a video to YouTube criticizing Governor Andrew Cuomo for allowing the cop-killer to go free, and to have the ability to vote in the November mid-term elections.

NYPD Officer Joseph Piagentini and his partner—Waverly Jones—were murdered in 1971 by a Black Liberation Army member named Herman Bell. Bell reportedly lured the two officers to an apartment building for an ambush attack.

Bell was sentenced to prison for 25 years to life, according to Fox News.

However, in April, the New York State Parole Board granted Bell his release. A month later, Bell was given the right to vote thanks to a conditional pardon Cuomo, a Democrat, granted to more than 24,000 parolees, Fox News said.

The YouTube video is part of the election campaign for Republican gubernatorial nominee Marc Molinaro, who opposes Cuomo in the November election.

Sheriff Ed Gonzalez said the deputy was alert and conscious on the way to an area hospital. He's expected to survive after being shot multiple times, including in the hands, back and cheek.

The study found that scoop and run hospital transports had survival rates comparable to those transported by EMS professionals highlighting how crucial police have become to patient care.

The association has listed three measures it supports and will grade lawmakers on this session, including state money to help small departments provide bullet-resistant vests, $1,220 a year in supplemental pay for officers at accredited departments.

Majority of Mayors Do Not Want to Reallocate Police Funding

Eighty percent of the mayors who responded to the Menino Survey of Mayors say they believe their police budgets last year were "about right." Most mayors said they did not support reallocating many, or some of their police department's resources and responsibilities.