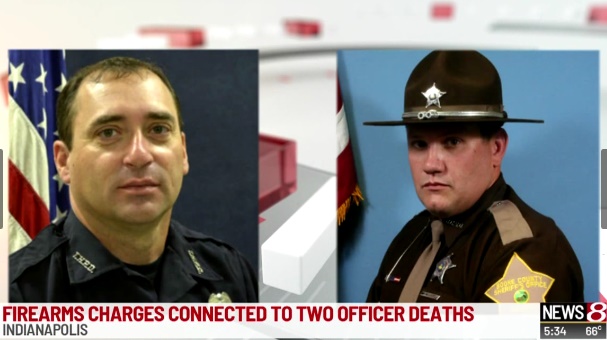 Three people were charged Monday for roles in illegally purchased weapons that were used in the shootings of two Indiana officers, according to WISH-TV in Indianapolis.

United States Attorney Josh Minkler formally announced the charges against three individuals who are believed to have illegally purchased firearms that were used in the fatal shootings of Officer Robert Pitts, a 16-year veteran of the Terre Haute (IN) Police Department, and Deputy Jacob Pickett, who had served with the Boone County (IN) Sheriff’s Office for three years.

“When guns are purchased or possessed illegally, it is never for a good reason and the results are often tragic," said Minkler. “We all continue to mourn the loss of Deputy Pickett and Officer Pitts and law enforcement must hold all those who contributed to their senseless death accountable. Those who lie and buy guns will be prosecuted in federal court.”

An officer with the London Metropolitan Police Department was gunned down inside a department station house in the Croydon neighborhood on Friday morning, the agency said in a statement.

A female deputy formerly with the Sacramento County Sheriff's Office has been sentenced to six months in jail after being found guilty of having an inappropriate sexual relationship with a teenage boy.

The Fountain (CO) Police Department has named its new K-9 "Moody" in honor of Marshal John Lindamood, who was shot and killed in 1921. At the time of his death, Lindamood was 45 years old.

Officers with the Buffalo (NY) Police Department will no longer be required to display their names on their uniforms.

Chief John Hayden said Tuesday he hopes that the recent removal of the residency requirement for his department will help generate a net increase of about 100 officers over the next year.

Two officers with the Louisville Metro Police Department were shot and wounded as what had been a mostly peaceful protest during daylight hours devolved into a violent riot after the sun set and a government-issued curfew loomed over the city.