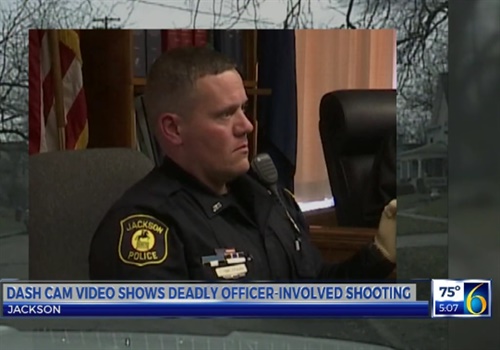 A recently released dashcam video shows an officer-involved shooting in Jackson, MI, that left one officer injured and a suspect dead.

On the afternoon of April 1, Easter Sunday, officers from the Jackson Police Department were called out to a domestic dispute. Investigators say Christopher Hall walked out of his house and immediately started shooting at officers, reports WLNS.

Officials say 36 shots were fired, 15 of them by Hall. One of the bullets hit Officer Thomas Tinklepaugh in the leg. Hall was fatally shot.

Jarzynka found the actions from police were justified because Hall shot first, refused to drop his weapon after hearing commands from officers, and posed a clear threat to officers, who acted in self-defense.

Officer Tinklepaugh is now recovering from his leg injury and is expected to return to the police force.