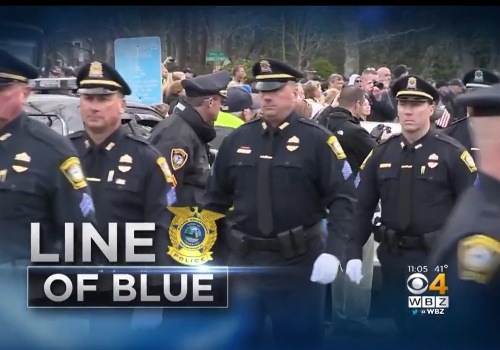 Members of the community, wearing blue, lined Route 28 Tuesday afternoon as police escorted Gannon from the funeral home in Hyannis to the Yarmouth church. Thousands of officers from around the country were there for a walk-by and a moment of silence, reports WBZ-TV.

The 32-year-old Gannon was shot and killed last Thursday while he and other officers were serving an arrest warrant at a home in Barnstable, MA.

Thomas M. Latanowich, 29, has been charged with murder in the shooting. He pleaded not guilty and is being held without bail, reports the Boston Globe.

Gannon is survived by his wife Dara. He was an 8-year veteran of the department and the department's first full-time drug detection K-9 patrol officer. He was remembered in his obituary for his "high moral integrity, infectious humor, and collaborative work with colleagues," reports WBZ-TV.

Gannon was posthumously promoted to the rank of sergeant by his department Wednesday, reports the Boston Globe.

The round went through his hand and was stopped by the trooper's body armor, preventing additional injury.

Surveillance video footage from the Third Precinct showed Williams, wearing a mask, a baseball cap and a hooded sweatshirt, standing near the entrance of the Third Precinct holding a Molotov cocktail while other co-conspirators lit the wick.

The Special Investigations Unit (SIU) says OPP officers were sent to investigate an unwanted man on a property in Gore Bay, a community on the north-east coast of the island. The two officers, from the Manitoulin detachment, were following up on a property dispute investigation, according to the OPP.