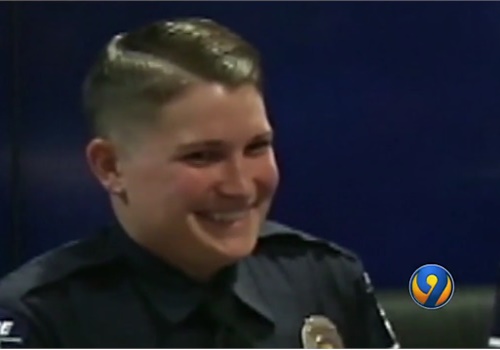 An officer was shot when a man wanted for allegedly killing his girlfriend Thursday afternoon in west Charlotte opened fire on officers in an ambush outside Charlotte-Mecklenburg (NC) Police Department headquarters late Thursday night, police said.

Officer Casey Shue was taken to the hospital after being shot in the leg but is expected to be OK, reports WSOC-TV. She was hired by CMPD in July of 2014 and was assigned to the North Tryon Division Crime Reduction Unit.

Shue was recognized as "Officer of the Month" this past August for her work in keeping the Hidden Valley neighborhood safer. That work included removing six guns from the streets while making 21 arrests, according to the department.

After the shooting outside of headquarters, Officer Shue was placed in the back of a patrol car and tended to before being taken to the hospital.

"He ambushed us, he shot at us, that's about all we're aware of at this time," the chief said. "We don't know about any conversation that preceded it."