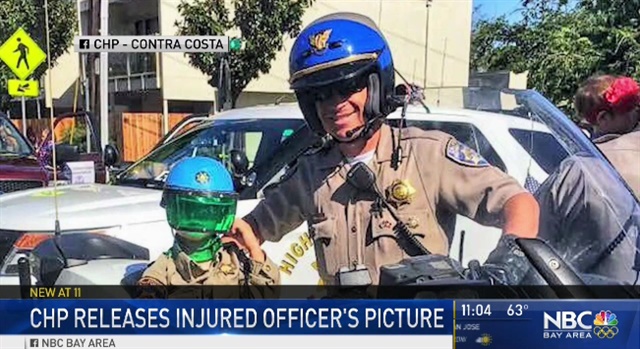 A female driver was arrested on suspicion of driving under the influence Monday night after she hit a truck that partially landed on top of a California Highway Patrol motor officer who was on the side of Highway 4 in Concord assisting with another wreck, according to the CHP.

Officer Martin Lendway was hospitalized with major injuries, including possibly having broken both legs, but he is expected to survive, reports KNTV.

The crash was reported at 6:15 p.m. on eastbound Highway 4. The CHP said Officer Lendway was taking a report on the freeway for a two-car, non-injury collision when an SUV came along and crashed into the officer's motorcycle and then a pickup truck, launching the vehicle and causing it to land on the officer.

Lendway is a nine-year veteran of the Contra Costa County CHP Division and a Marine Corps veteran. Witnesses said he is lucky to be alive.