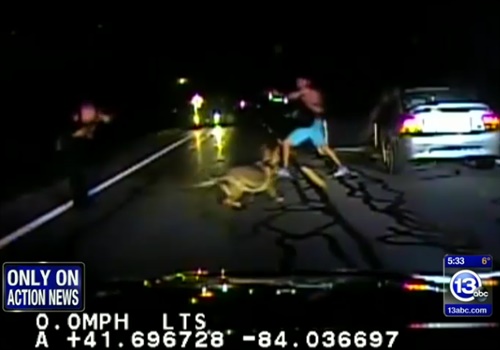 The Fulton County, OH, Prosecutor's Office released dash cam video of an 18-year-old man shooting a Fulton County sheriff's deputy during a traffic stop. The shooter and his girlfriend have both received prison sentences for their roles in the Jul. 31 shooting.

The dash cam video shows the driver, Jeshua Gilmore, and his girlfriend Skye Thibodeaux, 18, get out of the car. Thibodeaux runs into the cornfield. Gilmore fires four shots at Deputy Jeremy Simon, who calls for help, reports WTVG.

Gilmore pleaded guilty Nov. 6 to attempted aggravated murder and a firearm specification for the July 31 shooting of Deputy Simon, reports the Toledo Blade. Gilmore admitted that he shot the deputy twice in the left side after leading the officer on a short pursuit from the Country Corral truck stop on State Rt. 109 near Delta. Gilmore then fled on foot into a cornfield, stole a vehicle, and was arrested some 17 hours later by Toledo police at an Upton Avenue apartment complex.

Simon told the Toledo Blade he was off work for about a month after being shot and that he is now back on the road with his K-9.

A judge this week sentenced Thibodeaux to two years and six months in prison.

Authorities were monitoring Thibodeaux's social media posts and phone calls while she was on house arrest. The prosecutor says the 18-year-old continued to call her boyfriend after the incident and recently posted a picture of herself standing by a police car with her middle finger up accompanied by the caption "Free Jeshua."

The judge said he was furious over Thibodeax's behavior. He told her not to ask for judicial release anytime soon.