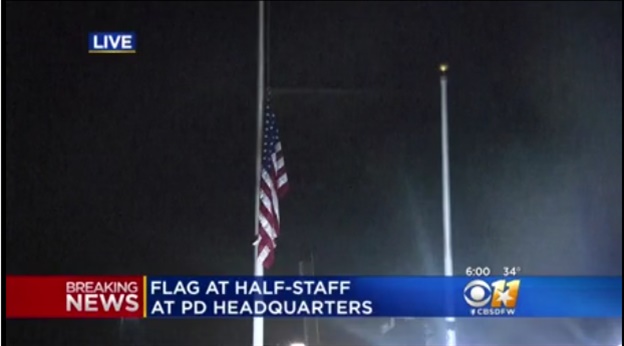 A Richardson, Texas, police officer and a civilian were both shot and killed at an apartment complex in the city on Wednesday evening. The gunman, who barricaded himself inside a unit for nearly five hours, was taken into custody just before midnight.

The officer, whose name has not been released, went to the Breckinridge Point Apartments near Renner Road and North Star Road around 7 p.m. in response to a disturbance call. After being shot the 37-year-old officer was rushed to Medical City Plano but died from his injuries. It’s believed he was shot in the neck, CBS DFW reports.

Police kept apartment residents inside their units as the standoff with the barricaded suspect dragged on — with the man randomly firing shots throughout the evening. Ultimately, the suspect, whose name has also not been released, surrendered. Witnesses said the man shouted “I’m sorry” as he was taken into custody.

Around the same time the suspect was taken into custody police announced that the second person who was shot had died. Early Thursday morning that victim was identified as 30-year-old Rene Gamez.