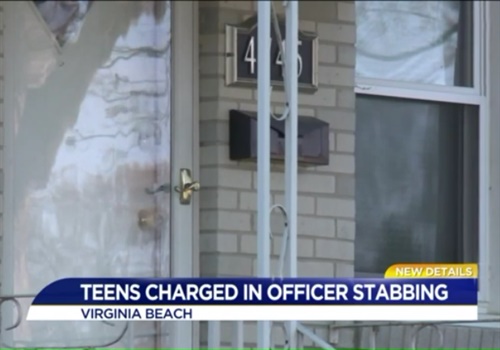 A Virginia Beach, VA, police officer has been released from the hospital after being stabbed while responding to a domestic call early Wednesday morning.

At approximately 2:47 a.m, dispatchers received a call for a domestic altercation in the 4700 block of Victory Road. Upon arrival, Officers located a 17-year-old male in the front of the residence who became uncooperative, reports WTKR.

While officers were attempting to detain him, the suspect stabbed one of the officers with a knife. Other officers on scene immediately provided first aid to the injured officer, as the juvenile suspect was placed into custody without further incident.

The suspect has been charged with Attempted Capital Murder of a Police Officer for the stabbing. Police also determined the teen was involved in an assault and robbery that occurred earlier at a nearby residence. Another 17-year-old was also charged in relation to the robbery.