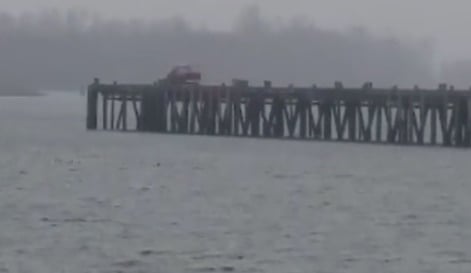 VIDEO: OR Pursuit Ends with Suspect Driving into River

A police chase in Oregon this week ended with a fleeing suspect driving off a pier at full speed into the Columbia River.

Timofey Erofeeff, 27, was allegedly trespassing at a marina in Astoria, Oregon, according to the Daily Astorian, when a vehicle pursuit was triggered.

The chase ended when Erofeeff drove his truck right off the end of a pier. Police estimated he was driving 45 mph at the time he launched into the river.

According to Clatsop County Sheriff records, he has been charged with six counts, including attempt to elude, criminal trespass, escape, interfering with an officer, offensive littering and reckless driving, ABC News reports.