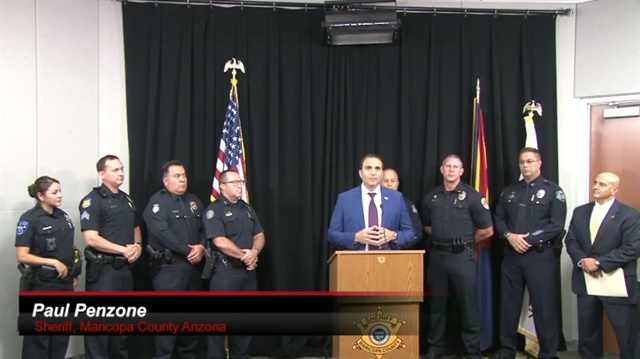 The Maricopa County (AZ) Sheriff's Office put out a press release Tuesday regarding its successful involvement in Operation Purge:

The Maricopa County (AZ) Sheriff's Office, the Federal Bureau of Investigation, and other Valley Police Departments in Arizona made 130 arrests of violent criminals and cleared another 355 felony warrants in July and August as part of the nationwide Operation Purge. Targeted individuals were wanted for homicide, sexual assault, aggravated assault, robbery, and burglary. MCSO's Fugitive Apprehension Team (FATE) took 14 into custody. Many of those now in jail had been arrested previously, were released on bond, and failed to appear for court hearings.

"The fastest way to make communities safe is to arrest known violent criminals," said Maricopa County Sheriff Paul Penzone. "This is a priority for MCSO and for all local law enforcement. Our multi-agency operation got felons out of neighborhoods all over the Valley."

Operation Purge is a nationwide partnership between local law enforcement and the FBI. In an intense and concentrated effort, FBI analysts identified outstanding warrants in high-profile cases; then they and local agencies executed the arrests. Operation Purge concentrated on approximately 3,700 felony warrants and cleared 465, either through arrest, or the individuals were determined to be deceased or already incarcerated. Additionally, FBI analysis identified approximately 800 individuals, with felony warrants, believed to be living outside of Arizona. The FBI, working with state, federal and local law enforcement agencies, believes these cases have high potential for follow-up and arrests.

"I promised the people of Maricopa County that we would keep their neighborhoods safe and protect them from violent crime," said Sheriff Penzone. "Using a specialized team like FATE, the FBI's technical expertise, and by collaborating with partner police departments, we've taken important and aggressive steps to fulfill that promise."

"This is not one and done," said Sheriff Penzone. "This multi-agency partnership will continue for the long-term until we get these violent criminals in custody."