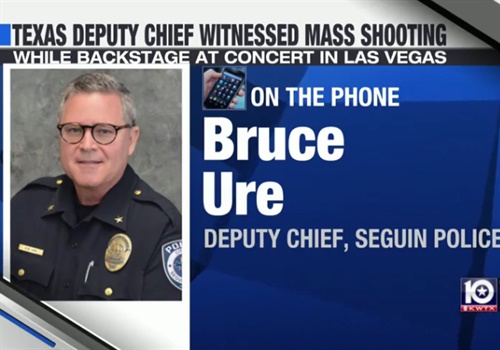 Deputy Chief of the Seguin (TX) Police Department, Bruce Ure, was off duty with friends in the VIP section of the Route 91 Harvest Festival listening to headliner Jason Aldean when gunfire broke out. He was one of many first responders who were there to enjoy the event that instead ended up helping to save people's lives.

"It's like a war movie," said Ure. "Debris was coming up hitting you in the legs because it was hitting the pavement, and people were screaming and crying and running."

At one point, a bullet nearly missed Ure's head, but a fragment of the shrapnel sliced his hand.

"That was my wake-up call, that told me, 'You stay there, you're gonna definitely die; this guy just came eight inches from your head,'" he said.

His police and EMT training kicked in, helping save people as he and his friends were running away including a man who was bleeding-out from his leg.