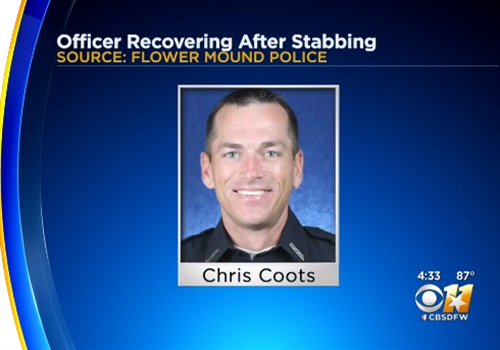 A shoplifting suspect stabbed a Flower Mound, TX, police officer in the face when the officer chased him down. The suspect is now in custody and the officer is recovering at home, reports CBS DFW.

The incident occurred at an Academy sporting goods store around 10:00 p.m. Friday.

Flower Mound Police Captain Wes Griffin said Officer Chris Coots was stabbed with a 3-inch stiletto knife and the wound went between the officer's teeth and cut the back of his throat.

Coots was able, with the help of two citizens, to subdue and handcuff the suspect, 18-year-old Nikoli Williford.

Coots was hospitalized for two days.  He is expected to make a full recovery.

Williford was charged with aggravated assault against a public servant, a first degree felony. He was also charged with theft for about $570 worth of Academy merchandise, a Class B misdemeanor.