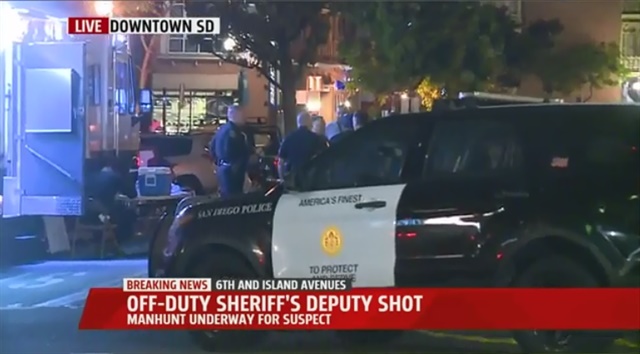 An off-duty San Diego County sheriff's deputy was shot three times in the shoulder during a confrontation early Monday morning in downtown San Diego's Gaslamp Quarter, and detectives now believe there may be a second suspect in the shooting, police said.

The deputy, whose injuries were not life-threatening, was walking with a group of people -- including two off-duty Escondido police officers -- when they were confronted by a man with a gun at 1:17 a.m. A struggle ensued, and the deputy was shot three times in the shoulder while a bystander was shot in the arm by an apparent stray bullet.

When the assailant pulled the weapon on the group, the deputy "started wrestling the suspect for the gun," San Diego police officer John Buttle told Fox 5.