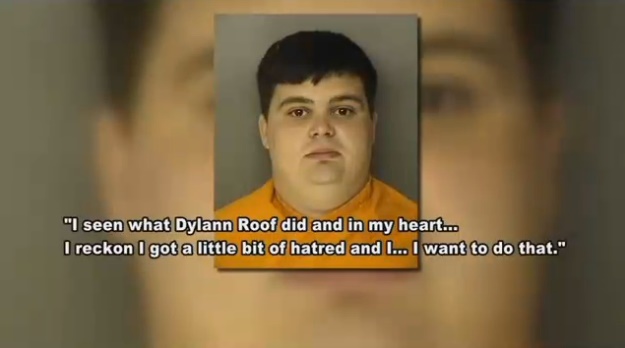 A man with connections to a white supremacy group was arrested in Myrtle Beach, SC, Wednesday after purchasing a gun from an undercover FBI agent, apparently intending to commit an attack “in the spirit of Dylann Roof,” reports WMBF.

Benjamin Thomas Samuel McDowell, 29, from Conway, was arrested at around 5 p.m. Wednesday by the FBI, according to records from the J. Reuben Long Detention Center.

On December 26, 2016, McDowell posted to Facebook a message: “I love love to act what u think,” followed by a link to the Temple Emanu-El Conservative Synagogue in Myrtle Beach, according to court documents. Horry County Police indicated to the FBI that McDowell had established White Supremacy Extremist connections while serving in prison in South Carolina for various criminal offenses. He also had tattoos indicating an affiliation with these groups.

On January 6, the FBI found a message from McDowell on Facebook Instant Messenger revealing that he requested an “iron,” a coded term for a gun.

McDowell first met with the undercover FBI agent on January 12. He discussed his beliefs in white power and indicated a hatred for non-whites. He continued: “If I could do something on a f****** big scale and write on the f****** building or whatever, ‘In the spirit of Dylann Roof.’” McDowell told the officer he had not decided on a place or time to conduct the attack.

The complaint states that on February 15, McDowell purchased a .40 caliber handgun and ammunition from the undercover FBI agent, and later that day was arrested. McDowell appeared in a federal courtroom in Florence Thursday morning for an initial appearance on a charge of felon in possession of a firearm or ammunition.