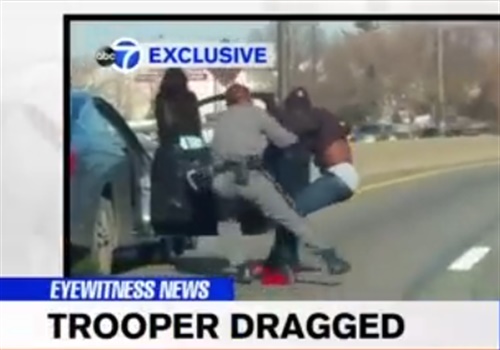 A New York state trooper attempting to make a traffic stop was dragged and injured by a driver on Long Island Wednesday afternoon, reports WABC.

The state trooper pulled over a vehicle on the westbound Southern State Parkway in Hempstead around 3 p.m. There was a struggle and when the trooper tried to arrest the driver, police say he took off with the trooper hanging from the window.

The car crashed into the center median and the two men tumbled out, the trooper's face bloodied from the assault, but still grappling with the driver. The trooper finally got the upper hand and pulled the man to the median.

Two other motorists got out to help hold the suspect down as the trooper bent over to catch his breath.

The trooper is being treated at a local hospital for head injuries.