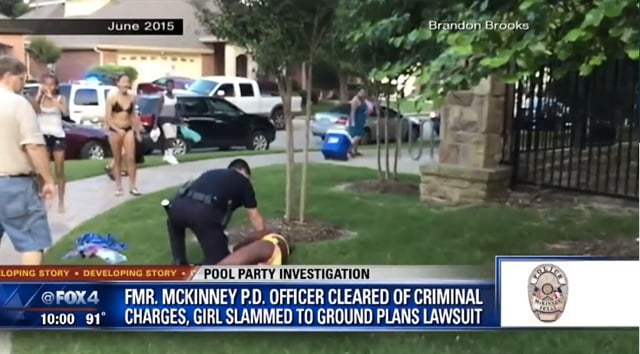 A Collin County (TX) Grand Jury declined to indict a former McKinney police officer for his role in breaking up a pool party last June and taking down a 15-year-old girl.

The girl, her family and her attorney now say they’ll still see the officer and McKinney officials in court.

Eric Casebolt was caught on video pushing then 15-year-old Dajerria Becton to the ground and drawing his service weapon on other teens. Casebolt resigned from the department shortly after the incident, which drew nationwide attention.

Tom Mills, Casebolt's attorney, said his client has been waiting for the grand jury's decision.

"He was very happy, he was very relieved," said Mills. “He mentioned that he had not been actively seeking employment for a while to kinda get this cloud, this issue, resolved in his life.”

Police said officers were responding to reports that teens unauthorized to use the pool were jumping a fence to gain entry. Residents of the neighborhood had said teens attending an end-of-school party at the pool and adjacent park were acting unruly.

The Texas Rangers investigated Casebolt for his actions during the pool party incident at Craig Ranch and presented their findings to the Collin County District Attorney’s Office. The grand jury issued its no-bill on Thursday, Fox 4 News reports.