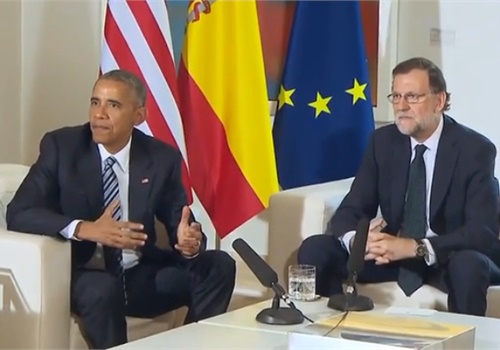 VIDEO: Obama Says Police Can 'Make the Job of Being a Cop a Lot Safer' by Admitting Failures

America's police will be safer when they admit they have a problem, President Barack Obama declared last week at a bilateral event with the prime minister of Spain in Madrid, reports the Media Research Center.

Fielding a question on Sunday, July 10, about the violence against police in Dallas, which left five officers dead, Obama said police officers will be safer once they acknowledge their failures:

"There are legitimate issues that have been raised, and there's data and evidence to back up the concerns that are being expressed by these protesters.

"And if police organizations and departments acknowledge that there's a problem and there's an issue, then that, too, is going to contribute to real solutions. And, as I said yesterday, that is what's going to ultimately help make the job of being a cop a lot safer. It is in the interest of police officers that their communities trust them and that the kind of rancor and suspicion that exists right now is alleviated."

The association’s logo covered the Camaro’s hood. A big decal with the 62 names of the fallen officers covered the trunk. And the FWPOA’s logos adorned both rear quarter panels. The idea came out of this spring’s national protests against police.

The 7-foot-1-inch former center has gone through multiple law enforcement training programs and held similar roles in or around his former NBA cities including Los Angeles, Boston and Miami.

Rankin County Sheriff Bryan Bailey shared a post on Facebook from John W. Hamilton, the father of Richland Officer Coty Hamilton, who said his son crashed into a tree and his patrol car burst into flames. John Hamilton said in the post that two officers pulled his son out of the burning vehicle.

In the second night of unrest in Philadelphia after the Monday shooting of Walter Wallace Jr. by police, police say 1,000 looters descended on retail stores in the Port Richmond neighborhood.

A man identified as Wallace can be seen on citizen video chasing the officers around the car. The officers give the man orders to "drop the knife." He appears to advance on them and they open fire.

A deputy with the Calvert County Sheriff’s Office was badly injured when her patrol vehicle collided head-on with a minivan early Tuesday morning.

Officers with the Brookhaven (IL) Police Department will now have the assistance of two mental health professionals when responding to calls involving persons in mental distress.

The American Civil Liberties Union of Hawaii has filed a lawsuit against the city of Honolulu and the Police Department alleging that an officer violated agency policy when he placed under arrest a teen who had gotten into an altercation with his son.