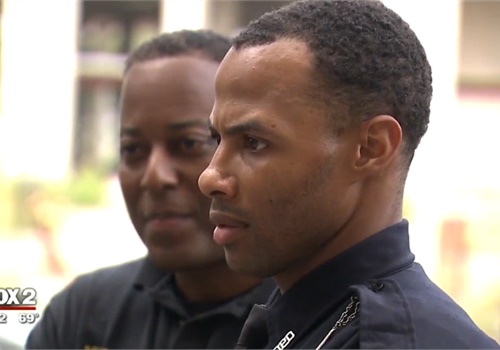 VIDEO: Detroit Officers Kicked Out of Court by Judge in Shooting Suspect's Hearing

Detroit police Officer Jamarian Holloway was a victim of a crime last June. He was shot in the hand as he wrested a gun away from a man who resisted arrest. When about a dozen Detroit police officers filled the suspect's evidentiary hearing Wednesday to show support for their fellow officer, the judge asked the officers to leave, reports WJBK.

"We do not know if the suspect may have individuals show up to do harm to our officer," said Cmdr. Elvin Barren. "It is physical support and then it is emotional support."

But it appears Wayne County Circuit Court Judge Craig Strong was not comfortable with the officers being there. In the end, Judge Strong asked all but three officers and Holloway to leave his public courtroom.

"If this would have been any other individual who was there and he wanted his family or co-workers there, it wouldn't have been a problem. But because it is law enforcement I feel that was the rationale behind the judge dismissing us from his courtroom," said Barren.

Judge Strong told a reporter by phone that he felt the officers were there to intimidate him or influence his decision on whether to dismiss any of the charges against the suspect.

In the end, the suspect pleaded guilty to resisting and obstructing police causing injury and felony firearm.