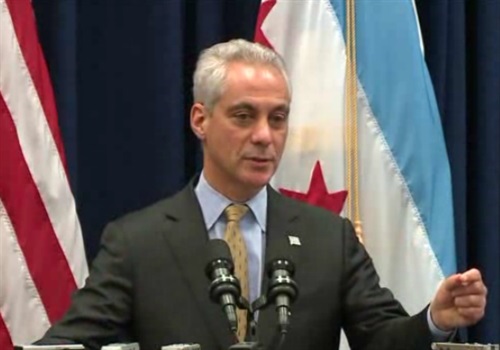 Chicago Mayor Rahm Emanuel left open the possibility Wednesday of dismantling the city's police oversight agency and acknowledged that racism is a problem within the police force and other City Hall departments, reports the Chicago Tribune.

Emanuel's remarks came shortly before his appointed Police Accountability Task Force released its recommendations for reforming the Chicago Police Department. The mayor was asked about portions of a draft executive summary of the task force's report the Tribune first reported on Tuesday, including a recommendation to put in place a citywide reconciliation process beginning with the "superintendent publicly acknowledging CPD's history of racial disparity and discrimination."

During the post-City Council meeting news conference, Emanuel walked the line of arguing progress had been made in some areas while acknowledging much more work had to be done in others.

He repeatedly said that he had yet to be briefed by the task force on its report and had not read its findings, but said he would remain open to any recommendations the panel makes. That would include its call for dismantling the Independent Police Review Authority, the civilian-run agency that investigates allegations of officer misconduct.

"People have to have confidence, whether it's IPRA or whatever the entity is that has oversight as it relates to police disciplinary action. That is an essential component to restoring the trust. It's not the only, but it's an essential ingredient," Emanuel said. "Whether it's IPRA or not, the function needs to be there and that's what we're going to strive and get right in that effort."